This video focuses primarily on Tea Tree Oil as a treatment for nail fungus but the same points made about tea tree oil apply also to other OTC medications.

In fact, there is are three topical medications on the market that has been shown in reputable studies to actually help kill the fungus AND make infected nails look better.  It is important to note, however, that while they have been shown to help, none of them work particularly well. The best ones only work about 15% of the time.

The oldest one is the medication Ciclopirox.   Ciclopirox Nail Lacquer (trade name – Penlac®) is a topical nail solution that actually has been studied

and found to be effective at clearing the nail in some patients.   In addition, Ciclopirox is much cheaper than many OTC topicals.   I’ve seen in available for under $12 for a 3 month supply.    You can read more detailed information here about Ciclopirox.

But here is the kicker – even Ciclopirox only works about 8% of the time.

The reality is that no topical medication works well to clear nail fungus in most cases.  None of them penetrate deep enough to make a difference in most people with the fungal infection.

We often use Ciclopirox to help prevent reinfection of the nail after treating the fungus with oral medication or laser, but do not consider any topical as an effective treatment on their own.

Kerydin® and Jublia® both work about 15% of the time. So again, better, but not great. 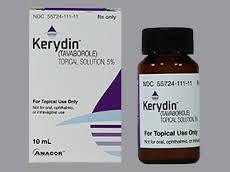 The other problem with Kerydin® and Jublia® is that they are very, very expensive. Close to $500 per month and you will need at least a 12 month supply for best results.

So, Should you use Topical OTC Anti-fungal Medications?

If you are going to try a topical medication for nail fungus, get a prescription from your doctor for Ciclopirox, Kerydin or Jublia.  They are all more effective than any OTC topical. And Ciclopirox is both more effective and less expensive than OTC anti-fungals.

You can read more here about cures for fungal toenails.

2 thoughts on “Do Topical Medicines Work for Nail Fungus?”