Guide to Strengthening Your Arch

Why Should You Strengthen Your Arch?

Several recent studies have shown that strengthening the arch of the feet can help support the arch and decrease foot fatigue.  This post will present the two most effective methods to strengthen the arch.

A 2008 study of the function of the arch muscles showed that the abductor hallucis muscle (small muscle on the bottom inside portion of the arch) contracts to support the arch and control pronation while standing.1  This article suggested that strengthening and thus improving the endurance of these intrinsic foot muscles may reduce over-pronation, and the subsequent problems that are associated with it. These problems would include plantar fasciitis, shin splints and even some causes of knee pain.

Which Exercises are Most Effective at Strengthening the Arch

Although the Short Foot Exercise is a bit more effective, we tend to recommend a version of the Toe Curl Exercise the most. It is simply easier to do (especially when you follow the instructions in Video #3 below).

An easier version of the Toe Curl Exercise using an arch strengthening tool that can be found on Amazon can be seen in the 3rd video. Because this is an easier and more convenient way to strengthen the arch, we recommend it to many of our patients.

We do still recommend the Short Foot Exercise to high level athletes.

How to use the Archexerciser 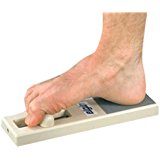 You can get the Archexerciser here.

Can Orthotics Help Strengthen the Arch?

Will Custom Orthotics or Prefabricated Orthotics Work Best to Strengthen the Arch?

FootChair Adjustable Arch Orthotic. This device is built with a higher than average arch for extra support but also has an arch that can be increased (for more support) via pads that can be inserted under the cover.

One thought on “How To Strengthen the Arch of Foot”