Video: Is There a “Best” Running Shoe for Your Feet?

In our Seattle foot and ankle clinic, we treat many runners including those that run in traditional shoes, minimalist shoes or run barefoot. A question that is commonly asked is how injuries compare between barefoot and minimalist shoe running versus traditional running shoes. The truth is that it is not clear. There is not much research indicating that barefoot running decreases injuries in runners or that traditional shoes decrease injuries either.

But there have been some good studies on barefoot running and the following is what we do know: 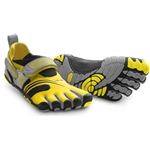 Craig Payne, an Australian podiatrist and a top biomechanist, provided an excellent summary of the issue on the Podiatry Arena forum. We agree with his take on barefoot running. Here is what Dr Craig Payne wrote on Podiatry Arena on the subject:

“We were created to run barefoot to survive, so we can move camps, can hunt for our food, etc. But that was before concrete got invented and we started to run for fitness, recreation and competition rather than survival (but given the obesity epidemic we may need to run for survival in the near future!). Because of the invention of concrete, we needed another invention – the running shoe.

Running barefoot comes in two forms. Those that do it in moderation as part of a balanced running program and those that use it as a philosophy that underpins their running. It is this later group I have a problem with. They are like religious zealots that are fanatical about it. They use nonsensical non-scientific mumbo jumbo to support what they do. They use any piece of evidence that is negative about running shoes as “proof” that barefoot running is better. They grasp at straws to misrepresent other research and dismiss any anti-barefoot research. They claim there is research for it, but when you look at the research, it does not support it – they misrepresent what the research is showing (…and even when you point that out to them, they continue to claim it supports them).

At the end of the day, there is not one piece of evidence that shows barefoot is even ideal, let alone beneficial. Yet do an internet search for barefoot running and look at the extraordinary range of claims being made for the benefits of it. HOWEVER, there is no evidence that it is not beneficial either. Yet the fanatical supporters of barefoot running quote a wide range of research to support their cause. When I read the reference list for the claims, not one piece of the research says what they claim it says. Trying to discuss rationally with these people is like trying to argue a religion – you never going to win that argument.

They also like to be dismissive of claims by Podiatrists that running barefoot is not good as Podiatrists have a vested interest in foot orthotics. That is just silly nonsense. Podiatrists will, generally, always be motivated by what is best for the patient and if the evidence says that barefoot running is beneficial, then they will be recommending it. There are even Podiatrists who are barefoot runners! I love the way the fanatics claims that Podiatrists are anti-barefoot running because of the orthotic $. They need to come up with some better evidence and data than that silly argument.

There have been some very balanced discussions on Podiatry Arena on barefoot running; certainly more balanced that the fanaticism and zealotry seen on some running forums to do with barefoot running.

I am not opposed to barefoot running; it is just I want good evidence to guide me as to what runners should and should not be doing it; it probably should be done in moderation as part of a balanced running program; and the zealots need to get over it.”

Dr. Kevin Kirby is an international expert on foot biomechanics, orthotics and barefoot running. He recently gave a lecture which runners who are considering barefoot running will find useful. In the videos below, Dr. Kirby discusses the scientific research on barefoot versus shod running and his personal experience as a competitive long distance runner, biomechanics professor and sports podiatrist.

Some Injuries May Increase with Minimalist Shoes and Barefoot Running

Our experience is that barefoot and minimalist runners get injured at the same rate as those that wear regular shoes, but they are trading one group of injuries for another. In our practice, we’ve observed that those who choose traditional running shoes are more likely to develop Runners’ Knee and shin splints while those who use minimalist shoes are more likely to develop forefoot problems such as Morton’s neuroma and metatarsal stress fractures. In fact, we have seen more metatarsal stress fractures in the last year than in any previous year in our more than 20 years of practice because of the trend in toward minimalist shoes.

Anyone that is considering transitioning to minimalist running shoes should be aware of some recent studies on the types of injuries most likely to increase with barefoot running or minimalist shoes.

A 2015 study shows that runners over 30 should be extremely cautious in transitioning to barefoot running in order to avoid injury1. A study of 30 runners with at least 10 years running experience found they did poorly when transitioning to a forefoot strike pattern favored by the minimalist shoe. Researchers tested the runners at various speeds, in both standard running shoes and barefoot capturing the foot strike pattern by video as they ran.

Researchers found “There was persistence of the heel strike in the adults, regardless of speed” and “43 percent of the adults continued to heel strike barefoot at the highest speed, compared to about 12 percent of the adolescents.” This is indicative that runners must take a much longer time than is currently assumed to transition into barefoot or minimalist shoes for running.

A 2013 study published in Medicine & Science in Sports & Exercise2 found that runners who transitioned from standard running shoes to minimalist shoes were more likely to suffer a stress fracture in their metatarsal and tarsal bones than runners who chose shoes with more support. We have seen this in our practice as well. In the first two years of the minimalist shoe trend, we treated more stress fractures than in the prior 10 years combined. As the minimalist trend has died down over the past couple of years, the number of stress fractures we treat has dropped back to normal levels.

Trends develop with every human activity – some as a style choice, some in an attempt to improve performance. A trend that began several years ago in running apparel was minimalist running shoes. These are designed to closely duplicate a barefoot running experience while still protecting the foot. Minimalist shoes have become very popular in recent years for both dedicated and casual runners but can be problematic for some people.

For instance, runners with a biomechanical imbalance may suffer discomfort, pain, and injury from the use of minimalist running shoes. And patients with common running injuries may exacerbate the problem by choosing minimalist shoes due to a lack of support and stability. This is not to say that these shoes are necessarily bad for you, but that care must be taken when wearing them. If you believe you may have suffered a foot injury from running, see your podiatrist immediately for help in determining if your shoes are a contributing factor.

A biomechanical imbalance will commonly cause gait problems for runners, leading to pain and possible injury. In most cases, the imbalance can be corrected and the pain relieved through the use of custom foot orthotics. These are orthopedic shoe inserts designed to improve support and stability. Orthotic therapy is common for running injuries and very effective in the vast majority of cases. However, minimalist running shoes commonly lack the room for a standard orthotic. We can make orthotics that fit in minimalist shoes, but like the shoe, they must be smaller than standard orthotics. We also often recommend specific over-the-counter arch supports that can fit in minimalist shoes.
Still other patients with no biomechanical problems will develop foot problems once they switch to minimalist shoes. In these cases, the use of the shoes should be discontinued. If you have only recently developed foot pain despite having worn minimalist running shoes for years, it is unlikely that the cause of your pain is the shoes and it is some other problem that needs attention. In other words, if you’ve been wearing minimalist shoes for running without problems, feel free to continue doing so.

If you are a runner experiencing foot pain, contact Dr. Huppin or Dr. Hale. The Foot & Ankle Center of Washington has a national reputation for the conservative treatment of running injuries which are one of our primary specialties. We work daily with runners that choose standard running shoes, minimalist shoes and a few truly barefoot runners.

It is not our goal to limit or stop your running, but to help you improve your running and make it pain free. If your shoes are the issue, we will let you know. If not, other therapies will be recommended including custom made and personally fitted orthotics where appropriate. We are well known for building the best orthotics for runners.

If you are considering moving toward barefoot running or minimalist shoes, make an appointment to see us prior to beginning your program. We can help you develop a plan that will minimize the risk of injury. If you are unsure whether you would be better off wearing traditional shoes or minimalist shoes, we can analyze your gait, examine your feet and help you determine which is likely to be the best choice for you. Be sure to bring all of your running shoes to your appointment.