We treat a lot of firefighters here in our Seattle foot and ankle clinic.  In addition I have a number of friends who are firefighters and this has given me some interesting insights into the footwear used for firefighting.   The boots that firefighters wear to fires are called turnout boots (also known as bunking boots or bunker boots).   Due to the enormous amounts of potential hazards at a fire scene to the feet, turnout boots are required to be able to protect the feet from  heat, compression, impact, electrical conductivity, and sole penetration.

What are the Safest Turnout Boots?

Firefighter turnout boots can be made of rubber or leather.  An interesting new study (see below) shows that the rubber turnout boots provided by the Seattle Fire Department may be less safe than leather boots. Not only are the leather boots more comfortable, and less fatiguing; but it seems to me that the more stable turn-out boots are safer for the firefighter as they provide for greater stability and faster movement.

Most of the firefighters I know hate the turnout boots that the Seattle Fire Department provides. They are rubber boots which are unstable and large.  Imagine fighting a fire while wearing fishing waders.   From what I understand, the SFD provides each firefighter with rubber turnout boots, although they will allow purchase of a leather boot with a doctor’s prescription.  Many firefighters who cannot get a doctor’s prescription will buy leather boots with their own money.  Regardless of whether the firefighter has a pair of leather boots, we taxpayers are paying for a pair of rubber turnout boots for each firefighter.  What a waste – it seems more far more fiscally responsible to simply provide a voucher toward boot purchase that can be used for rubber or leather boots.      In addition, almost every firefighter I see as a patient has a foot problem that benefits greatly from wearing the leather boots so I write a lot of prescriptions for  leather bunker boots.

The following is a press release from NIOSH:

An ongoing study by the National Institute of Occupational Safety and Health has found that the weight and material of firefighter boots can have significant impacts on the way wearers move and perform.

Preliminary findings from the first phase of the study suggest firefighters must adjust their walking patterns and postures when wearing the heavier rubber boots, walking more slowly and taking wider steps.

In addition, for each stride firefighters in the study took, the percentage of time when both feet were in contact with the floor was longer with the heavier footwear, suggesting the need for more time to balance their body during walking.

The weight of the boots was also found to affect the way participants naturally moved their lower bodies. Resultant joint loadings at hips and knees were significantly increased when wearing rubber boots during normal gait. These heavier rubber boots limited ankle, knee and hip motions, with NIOSH researchers believing such restrictions may affect firefighters’ ability to maintain balance or cross obstacles effectively during fireground operations.

Findings also indicate oxygen consumption, the amount the participant breathed and their heart rate were significantly greater when wearing rubber boots. During the treadmill test, those wearing rubber boots had a reduced SCBA duration by several minutes.

The second phase of the study focused on the physiological and biomechanical effects of stitched- and cement-soled boots on firefighters.

The final phase of the study will examine how different boots perform during obstacle crossing and ladder climbing to determine effects of weight, material and sole type on risk of trips/falls.

Given this information, my recommendation is that all firefighters should be wearing leather rather than rubber turnout boots.   There are several well-respected brands of 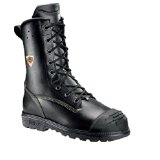 firefighting boots including Haix, Thorogood and Warrington.  One  of the models I recommend often is the Haix Special Fighter Extreme.  For firefighters fighting wildfires, look at “Wildland Boots” such as the Haix Fireflash Extreme.