What are the Best Orthotics for Flat Feet? 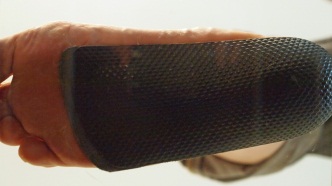 Figure 1: Bottom of foot on orthotic that is too narrow. Foot hangs over edge of orthotic.

People with flat feet often find it very difficult to get a pair of orthotics that not only support their flat feet and eliminate pain, but are also comfortable to wear.

On this page you will learn how orthotics must be made to provide relief for those with fallen arches and flat feet and why it is so difficult to find a doctor who is good at making them.We are experts are designing orthotics for even the flattest feet.

If you have flat feet, make an appointment to see us for an evaluation in our Seattle foot and ankle clinic.

Why is it so difficult to get good orthotics for flat feet?

Any insole for flat feet must not only support the arch but also be very comfortable. This is where the problems occur. When feet flatten excessively the force beneath the feet increases. When an orthotic is put under such a foot, the excessive forces can cause the orthotic to push so hard into the foot that it is painful. Much of the pain occurs because orthotics are often made too narrow causing the inside edge of the orthotic to press incredibly hard into the foot (figure 1).

Because so many people with flat feet would complain about orthotic discomfort, the doctors and orthotic manufacturers started making orthotics that were lower in the arch or more flexible so that they did not push so hard on the foot. These orthotics were more comfortable but they no longer provided enough support to eliminate pain caused by flat feet.

How must orthotics be made for people with flat feet?

Newer studies and technology directed at treating the flat foot have demonstrated how orthotics should be made for people with flat feet. The goal is to provide excellent support while still maintaining comfort. To do this the orthotic must be made in a very specific manner: 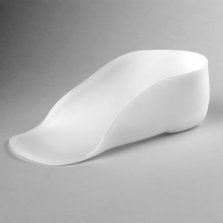 If you have flat feet, you may have received a prescription for a “UCBL” orthotic. UCBL stands for University of California Biomechanics Laboratory and UCBL orthotics were the the first plastic orthotic designed for flat feet.

First available in the 1960s, UCBL orthotics have a very deep cup around the heel and come up high on both the inside and outside of the foot.  The original UCBL orthotics were very good at controlling flat feet but tended to not be very comfortable.  In fact, often they were quite painful.

“Pure UCBL” orthotics are an outdated design usually prescribed by doctors who treat flat feet but who are not specialists in orthotic therapy.

Although we can certainly make a “pure UCBL” orthotic, the flat foot orthotics that we make incorporate the important control features of the original UCBL but eliminate those features that cause discomfort and do not contribute to control. You will get all of the benefits but none of the drawbacks of the UCBL foot orthotic.

Where to Get Flat Foot Orthotics

If you need orthotics and you have flat feet, you want to be absolutely sure that they are made correctly. Otherwise you will end up with an orthotic that is either supportive but not comfortable; or comfortable but not supportive. To ensure you get the proper orthotic, make an appointment today to see us.

If you are not in the Seattle area try to find a podiatrist who specializes in orthotic therapy.

Why are so many flat foot orthotics made incorrectly?

What are the best OTC arch supports for flat feet?

It is actually very difficult to control very flat feet with over-the-counter orthotics. They simply do not provide enough support for the severe flat foot. The best prefabricated orthotic we have found for flat feet is the FootChair Podiatrist Designed Orthotic with adjustable arch height. The arch can be adjusted for maximum support and comfort via pads that can be inserted under the cover.

Unfortunately, while it is better than most, even this arch support is usually not effective for people with flat feet. The fact is that people with flat feet simply need more support than they can get with a prefabricated arch support. Only custom orthotics are likely to provide proper support and pain relief; and even then only if they are made correctly.

Flat feet can cause many types of foot, leg and knee pain – even back and hip pain. Most of this pain can relieved with the use of proper orthotics. If you are going to invest in orthotics, make sure that your doctor understands the best techniques for making orthotics to treat flat feet.

Your best bet is to find a podiatrist who specializes in orthotic therapy. Ask them how they make orthotics to treat flat feet and make sure they make them as described in this article. Consider getting a second opinion before you invest in a pair of orthotics. If you are in the Seattle area, make an appointment to see us for your flat foot evaluation. We specialize in orthotic therapy and will ensure that your orthotics are both effective and comfortable.