Video: The In-toed Child – What Parents Need to Know

Most people’s feet angle away from each other at about 10 degrees. In some people, however, the feet point toward each other. This is called intoeing , or “pigeon toed.” It is very common to see very young kids with an intoed position of their feet. In most cases this will correct itself as the child grows.  In some kids, however, it doesn’t get better on its own and treatment is necessary to correct the intoeing and to protect the foot from damage due to compensation. If you think your child might be intoed, contact us today for an appointment in our Seattle foot and ankle clinic.

Intoeing itself is usually not serious, but in some cases children will flatten their foot in order to make their foot look less in-toed. When the foot is flatted, the front of the foot moves outward giving the illusion that the foot is less pigeon toed. In fact, however, this type of compensation can damage the foot.

Children often compensate like this when they are told by parents or grandparents to walk with their feet straight. The best advice we can give is to avoid telling your child to “straighten out their feet”. It doesn’t improve the problem and can actually harm your child’s feet. 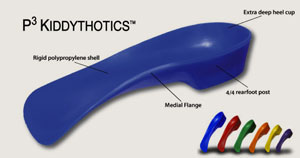 use an arch support to protect the foot from compensation that can cause long-term problems such as arthritis or bunions. One of our favorite prefabricated arch supports to protect kids’ feet is the ProLab P3 Kiddythotic.  The P3 Kiddythoic offers the best protection of any OTC orthotic we have found. If this does not provide adequate support we may use a custom orthotic but will usually start treatment with the less expensive prefabricated orthotic.

As long as their is no compensation that damages the feet, intoeing usually doesn’t cause serious problems even if it doesn’t go away by itself. Sometimes children with intoeing have problems getting shoes that fit, because of the curve of their feet.

A very few children have a severe twist in the leg bone (tibia) or thigh bone (femur), which might bother them because it looks bad or because the feet are so turned in that the child trips a lot. Sometimes this problem requires surgery.

How is Intoeing Treated?

Besides protecting the feet some very young children use braces to try and reduce the intoed position. This used to be a common treatment but is less used now as there is actually very little research that shows these braces to be an effective treatment. Although the braces have not been shown to be effective at reducing the intoed position of the feet, they still may be used in some kids to help train them to sit and sleep in a position that doesn’t make the problem worse.

In most cases we do not try to treat the intoed position. As noted above our primary goal is to stop compensation for the intoeing that can lead to foot and knee problems later in life.

There are three primary causes of intoeing in healthy children. They are metatarsus adductus, internal tibial torsion and excessive femoral anteversion.

What is metatarsus adductus?

If we see a child at a young enough age we may teach you to stretch out the foot. In infants with severe metatarsus adductus casts  may be used on the feet to help stretch them into a straight position.

There is some controversy about when the casts should be used, but some of the research states that if the feet are still curved when the child is 4 to 6 months old, casting should be started. The casting should be finished before the child reaches normal walking age at about 12 months. It’s ok if the feet are still a bit curved after the casting treatment, that will not cause any problems with running and playing, and is never painful. Even a big curve is really only an issue because it causes problems with shoe fit.

What is internal tibial torsion?

Internal tibial torsion is a twist in the larger lower leg bone (the tibia). In this situation you will usually not notice the problem until your child begins to walk. . Some inward twist of the tibial bone is normal in babies and this straightens out during the first year of life. In some children, the twist doesn’t get straight enough that their feet point straight ahead or outward and so your child may have an intoed gait as they begin to walk. The tibia  usually continue to grow straighter until the child is 6 to 8 years old so it is best to give it time to straighten out and just prevent damage to the feet as explained above.

Braces and special shoes have been used in the past for this problem but have not been shown to be helpful.  Most of the time we don’t treat internal tibial torsion in young children except to protect the feet from compensation. In a small number of kids the twist in the tibia doesn’t go away, but even then it hasn’t been shown to cause arthritis or problems with running and jumping.

In only the most severe cases where the child is very unstable because they trip over their feet surgery might be considered. The surgery should only be a very last resort as the surgery involves cutting the bones and turning them outward, so the feet point straight. Again, very few children have to have this surgery.

What is excess femoral anteversion?

Excessive femoral anteversion is an inward twist in the thigh bone (femur). This cause of intoeing usually is noticed around the ages of 2 to 4. It can actually get a bit worse during early childhood.

Excess femoral anteversion usually gets better without treatment. In most kids the feet will point a bit outward by the time they are 6 to 8 years old. Braces or shoe modifications used to be common but have not been shown to help so are not recommended any longer. In a very, very small number of children who have an extremely high inward twist in the thigh bone an operation is possible to cut this bone and twist it outward, so the feet will point straight ahead.

If you would like to have your child’s intoeing evaluated, bring them in for an appointment. Call today for an evaluation in our convenient Seattle office.